For most of the time since I started on my academic career path, I’ve been dealing with the feeling that no matter what I was doing, it was somehow never going to be either “good enough” or “real enough” to the point where I would one day be a Real Scientist. I’ve had impostor syndrome for quite a long time, although I’ve recently been discovering that it’s been deeply lessened within just the past couple of years somewhat by accident.

My particular flavor of impostor syndrome seems to have come from a few different angles, all of which have led to me feeling out of place in an academic career environment. I grew up in a fairly rural area, where it was expected that most people would continue on the family business after finishing up high school and possibly a few years of college. I’m actually the first of my family to attend and graduate from a four-year college, let alone go to graduate school and get my Ph.D. It wasn’t until I was a grad student, especially when attending some of my first conferences, that I began to realize that most of my colleagues had come from academic families quite unlike mine. Immediately I began to see myself as an outsider. I’m not entirely unused to feeling like an outsider, especially growing up as a queer trans kid in Small Town, USA, although being left out of straight/cis male culture has left me in quite a few awkward situations in my career when the conversation topics or meeting spaces would cause me to be left out.

The pressures of being a grad student also came with the expectations that a Real Scientist does two things: work in the lab, and occasionally sleep. These are often said with a laugh on top, but with the underlying message that the ideal is to spend your life in the lab, only really interact with others in the lab or a nearby lab, and that science comes before all else. Aside from being generally unhealthy, these expectations did nothing but lead to me further convincing myself that since I had a life outside the lab and couldn’t spend all my time in it that I would never be a Real Scientist. Over the years, though (and with lots of outside help), I’ve come to realize how important breaks and rest are. Working 24/7 is useless if you find yourself unable to focus and be productive. By the time I finished graduate school, I knew that I had to get better at time management and spending my productive hours wisely if I was going to make it in this field.

When I started my post doc is when I began to better track my time in earnest. I’d come to understand that I can’t do everything, as there’s just not enough time in a day, but that what I could do is effectively prioritize and carry out the big pieces of my job. I started keeping a daily list of what I did each day so that I could keep on track with important tasks. Eventually keeping track of them by reading an ever-growing list became unfeasible, so I began sorting them into categories. At that point, it made sense to track how they changed over time, so I wrote a small script to keep track of (roughly) how much time I was spending on each category and plot the categories vs time. This let me visually track my progress over days, weeks, months, and now years. It’s been a fantastic tool that I regularly visit to make sure that what I’ve been working on is what I actually need to be focusing on, which has been extremely helpful in keeping me on track and making progress while maintaining a life outside of academia. 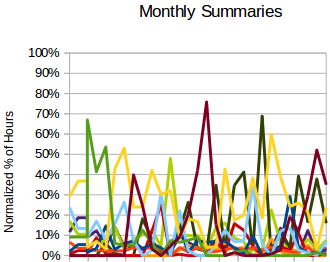 By plotting how I spend my time, I can see that I really need to step up the light-blue category for the next couple of months as the maroon category comes to a close for the year.

This time management has brought with it an unexpected consequence: my impostor syndrome is almost entirely gone. By keeping a daily log of activities and putting together weekly, monthly, and yearly summaries, I now have a list of thousands of items that I’ve done, and when I read through them they’re all things that a real scientist does. In regularly reviewing these items to make sure that I use my time well, I’ve been unconsciously proving to myself that I do all the things that scientists do, and now whenever that little voice pops up in the back of my head I can pull up a massive text file to prove it wrong.

Now as I prepare myself for the next stage in my career, I have the tools not only for keeping focused and managing my time, but also for pushing away my residual impostor syndrome.

Have you been able to to overcome your impostor syndrome, even if just partly? If so, what have you found useful for keeping it at bay?

19 thoughts on “Overcoming My Impostor Syndrome”